I was also dreaming of you, Alma and our little Angelina spending a safe and peaceful evening together in our cosy home, carrying my books heading to the school where I used to teach, but this turned into a nightmare with the sudden sound of gunshot, canons and bombardment, the sound of war. I woke up, to see myself wearing the dark green suit and the Adrian helmet guarding some miserable soldiers.
The shadow was emerging from behind the mountains. I thought I would trust these mountains forever. They were once friendly. Now, they hid nothing but ambiguity, horror and sorrow. They swallowed many of my commands. They prevented us from seeing the sun, our hope, our light in the darkness.

My best friend Connell died recently as you know. I’m still unable to cope with his death. He fought as a hero and remained strong despite his deep wounds and burns. It was summer. He was attempting to seem strong, trying to play golf, his favourite sport, on the ruins. He died two days after. Let me admit, Alma, when he died, my optimism died. I’m sure it was hard to tell his young wife and son the bad news, but you were brave, you were the best person to tell them because they knew you, and liked you. I’m pretty sure that you did not say it in one shot and were there to console them.
I had to wake the soldiers up. They were very tired after the fierce battle we had. Even that tiny village could not survive the war. It became the land of every battle. I won’t forget that brave old man who was the only civilian who had a gun trying to protect his family, friends and neighbours. He was hiding behind the tree which once was the shade for their children to play home games, I guess. I sympathised with the villagers. They refused to talk to us. I understand they were scared. They were right to be. We were killing their smile. When they saw us, they ran to their homes. Now the village is silent forever. My darling, do not believe all the news on TV. Most of it is fabricated. These people were not savage, they were poor, peaceful but scared. They were victims of cruelty.
Back to the dark gloomy mountains, where the end’s unknown. They are dressed in green pretending to be good, in fact, they’re not. They are evil personified
The shadow was getting bigger and closer. It looked like a soldier; someone is following him. I was asking myself,’ Are they from the alliance? What if they are enemies? Are they coming to fight with us or against us?’. I was becoming crazy in that dull place lying half-asleep in the hopeless trench. I was exhausted Alma. I was also starving. We missed food here. We have not seen it since last week, when we went to the closest village. It was ten miles from here. Bad luck struck once more. The enemy found us and started bombing the poor place. They used chemical weapons which spread like an angry volcano and ruined everything. It was raining cluster bombs as well. One of the children was saying to her mother with a happy innocent look; ‘Mummy, I smell apples, did you buy some? Then both died inhaling toxics. I’m sorry Alma; my tears defeated me. I wish we could’ve saved those people; they once had a dream, like you and me. They’ve dreamed of a world without war, but they’re the victims of war.

Finally, I could recognise the vision emerging from the darkness. I didn’t need to wake the soldiers up. Dark clouds were disappearing. My fellowmen came back. I hoped they brought hope with the rise of sun. 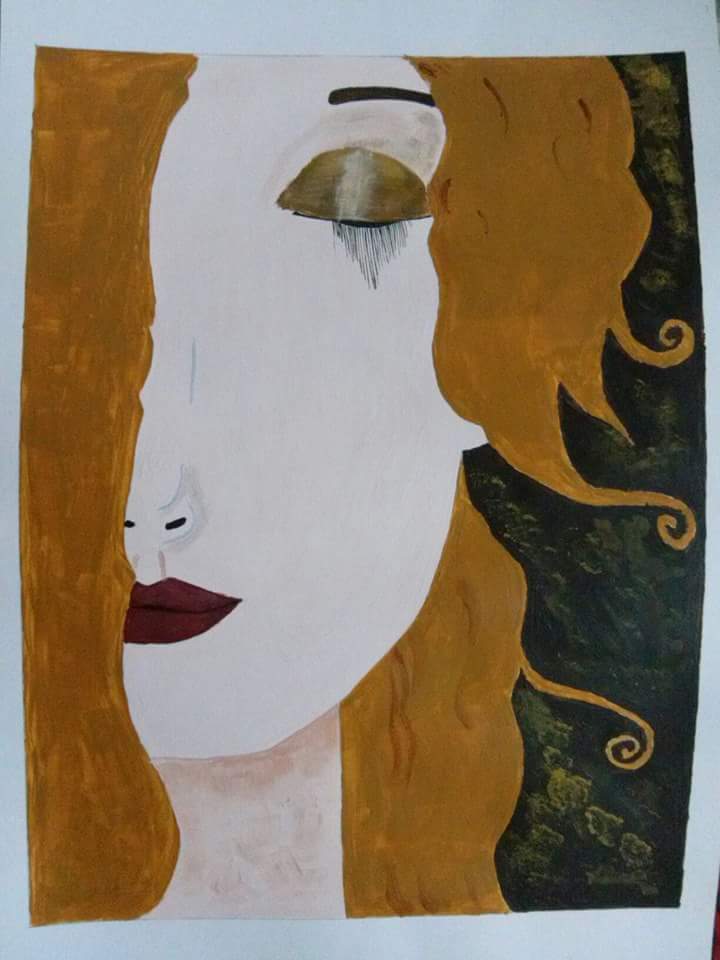 Alma, if I do not come back to our homeland, then tell our little Angelina how brave I was. Apologise instead of me for not being beside her. Tell her it’s my duty to defend the innocent. It was their fate to have war. Does she remember me? Let her see my photo and say to her when she grows up,’ Be proud of being a daughter of a man of war.’

* Painting :Mothna Alzobi is a Syrian artist lives in Jordan